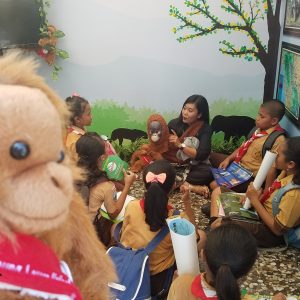 The future starts now. It is not merely a sentence, but also the fact. As generally known that to keep a the sustainability of something, it is not only about the present action but it also demands the planning of the future. Same goes to the conservation, it is important to share the passion and spirit to the next generation. As the future is in their palm to hold on and embrace.

Ensuring the better future for the orangutan, OIC released a new children’s story book about the issue of the Orangutan conservation with the aims that they can understand about how special this endemic critical endangered species have to endure the threats from human time to time. Not to mention, to grow the care, love and respect towards orangutan starts from their young age. This book was published as the part of Orangutan International Day celebration on 20th August 2017.

Narrated by Panut Hadisiswoyo, founding director of OIC, with me as the editor and illustrated by Irfan Art, a local artist in Medan, this book tells a tal about Oci, Sumatran orangutan baby who lived in Leuser forest with his mother that had to survive in their shrinking habitat that has been converted into plantation. As the title, Tersesat di Kebun (Lost in Plantation), both of them lost inside of the plantation that once was their home and facing the life threatening situation. Oci and his mother finally found their way of safety after OIC’s HOCRU team help them by relocating them into a safe part of Leuser forest. Their real homes.

Not only the book, the effort of sharing the message of orangutan conservation is also conducting by OIC through te story telling method. I, as the communication officer of OIC as well as the staff of runforrainforest do the campaign for the children through the story telling. I was also invited to attend the Festival of Indonesian Conservation Festival where all of Indonesian National parks and conservation agencies took their parts. Each of the national parks and conservation agencies throughout Indonesia has booth and represented the local culture as well as the ecological charms. Gunung Leuser National park’s booth presented a well decorated booth, also with me, doing the story telling as the key to attract the attention of the visitors. During the festival, which was happening on 11th-13th August 2017 in Banyuwangi – East Java, the visitor were given the new published book of Tersesat di Kebun to the lucky visitors that came from throughout Indonesia. At the event, the Gunung Leuser National Park’s booth visited by more than 500 visitors and succesful to gain the third winner as the most well concept booth. 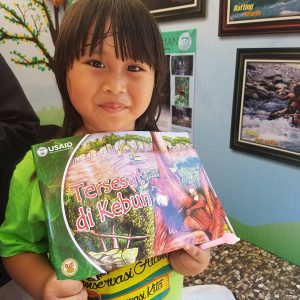 As the matter of fact, the storytelling concept is one of the significance reasons behinds the winning.
Children’s book and storytelling many not new methods, but they are proven as the succeding and welcomed methods by the children as well as many people. Thus, OIC tries to continue to publish the book in English version that can be used as a campaign tool for children in the overseas. At the moment, OIC is still trying to get the support for the publishing. Hopefully, it will be published as soon as possible. With everyone support, the sooner can be close enough! 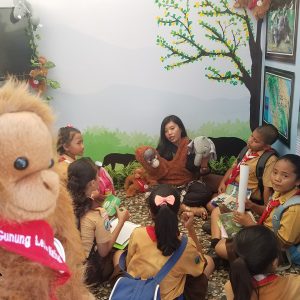