Mona was kept by a high rangking police officer in the region. Mona was not kept inside of the cage, she was hanging around on his front yard.

After conducting the general medical check up for Mona, she is stated to be in good health by one of OIC HOCRU team vet, Nul. 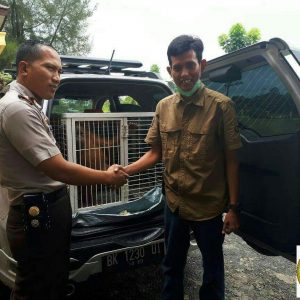 At the time, the orangutan is in SOCP’s orangutan quarantine centre for her new beginning of second chance at life. Within a week, two orangutan rescues are made possible by HOCRU team of OIC. Sadly, this rescue operation seems not going to be the last. Keep supporting our HOCRU team!