Every year, 19 August is celebrated as the orangutan international day. This day is set as part of the efforts to promote the orangutan conservation worldwide. OIC conducted an event to celebrate the day. 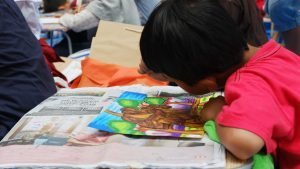 The event was called “Asa untuk orangutan” (Hope for Orangutan that consisted of some competition for children. Coloring and drawing picture of Orangutan and story telling which are followed by children from primary level to junior high school students. This competition was held with the aims of promoting orangutan as the Sumatran heritage, their own heritage, to protect and treasure. 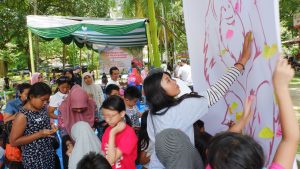 This event was a huge success that 150 children joined the event with such a high enthusiastic. Panut Hadisiswoyo, the founding director of OIC, stated that this event is important to share the spirit of conservation for children as the next generation. Without a doubt, the future of conservation is in their little hands. 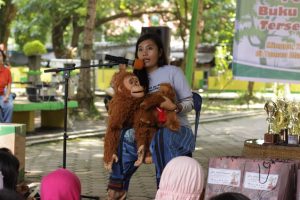 On the occasion, I also did storytelling in front of the children with the story of human-orangutan conflict as taken from the newly published book “Tersesat di Kebun”. Trough their sparkling eyes, their spirit of conservation has been rooting strongly. Hopefully, OIC can celebrate this day with bigger event next year.  Finger cross!